The Cucina a Go-Go Food Truck is where it all began for us.

After seeing the movie Chef, The Go-Go Food Co. founder Lorenzo Lucchetta was inspired to embark on his own food truck adventure, and Cucina a Go-Go was born.

With a focus on simple, fresh ingredients and classic Italian recipes with a unique flavour all his own, Lorenzo made his name in the food truck game.

These days, though we’ve expanded into Canadian cuisine as well, we’re still loyal to our roots, and Cucina a Go-Go remains hugely popular among Niagara residents.

Drop by Cucina a Go-Go and try some of our most popular, long standing dishes, such as our flavourful meatball sub, our melt-in-your-mouth manicotti, or our wildly popular Penne Pollo in its savory garlic-curry cream sauce.

Currently, Cucina a Go-Go is in the process of being reborn into a brand new truck. But don't worry! We'll be back on the road shortly. 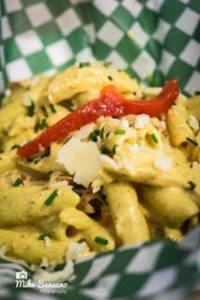 Penne Pollo has been a favourite since we first set up shop, and attempts to switch it out with different options have been met with serious discontent among our customers.

You'll be surprised and delighted by our Cucina Menu. Items are always changing, but here is a sampling to whet your whistle!

FROM OUR HAPPY CUSTOMERS!

Be the first to hear about special events & offers.